U.S. Secretary of Labor Marty Walsh sent out a tweet early this morning: a tentative agreement has been reached, which means a rail strike has been averted.

"Following more than 20 consecutive hours of negotiations, the rail companies and union negotiators came to a tentative agreement that balances the needs of workers, businesses, and our nation’s economy."

This morning, talks concluded with the three remaining unions. President Biden thanked the unions and rail companies for reaching an agreement. 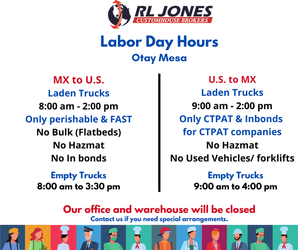 Good morning and Happy Monday to everyone.

Please note that Customs and Border Protection will observe Labor Day, Monday, September 5, 2022, with the following hours of operation: 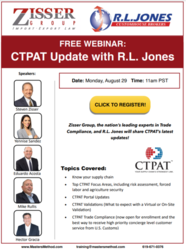 The following update is being provided for your awareness of the ongoing Manifestation/Protest in Tijuana affecting Both Northbound and Southbound Commercial Traffic:

The latest development from the protestors has shifted the ongoing protest West and has now impacted commercial Southbound traffic as MX ANAM has closed their Import Facility as of 1500 (PDT) .  Export Facility will have trucks standing by, until further notice.

The Otay Mesa Port has begun notifications to state and local Police and CHP has issued a cautionary SIG ALERT as of 15:15 (PDT), as traffic will not be moving until the protestors have cleared.  It is advisable that carriers of non-essential shipments please refrain from sending trucks until Mexico Import Facility is reopened, as would be informed in a follow up communication.

MX ANAM has shared with Port Management that negotiators are being sent to help end the protest, but CBP is unaware of how long the standoff will continue.

Northbound traffic has been entering into CBP Import Facility steadily as MX ANAM and local Tijuana Police were able to divert northbound traffic into secondary entrances to MX ANAM export facility.  Calle Doce (12th Street) remains blocked.  Wait times have not been able to be determined as traffic is not following it’s normal cueing via the Tijuana Export Corridor.

CBP and MX ANAM have been communicating throughout this unexpected event and will notify all once this is resolved.

Hope you have a great week.  Here is a little useful information from CTPAT

R.L. Jones has offices across all major U.S Southern ports on both sides of the border. Select a location to view more details